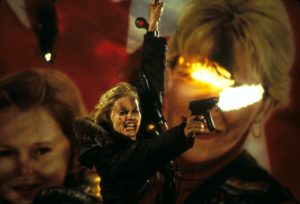 Fast action movie with Geena Davis, something you do not usually see her in.  Davis is remarkable in this dual role of two characters in this film. A single mother working as a school teacher in a small town community, engaged (Tom Amandes) and having no memory of her earlier years, the first memory was waking up in a hospital, two months pregnant. Fell in love with her daughter Yvonne Zima and carried on with her life. Eight years later, content with hosting the neighborhood holiday party, participating in the Christmas Parade, yet still always curious, continues the services of a cheap private detective Samuel L. Jackson to find her past.

A car accident on a snowy winter’s night and receiving head trauma began the visions of this other person.  Her persona becomes different at times, harder, she does not act like the

happy homemaker. After a forgotten suitcase is found she begins to find clues to who she was, scaring her at the findings within the suitcase. Who was she really??  Men appear at her doorstep and soon self defense skills
automatically take over her actions as she needs to save her daughter from these would be assassins. 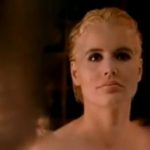 Geena Davis and Samuel L. Jackson follow clues from the suitcase leading them to friends. After placi

ng a call with a found phone number some questions get answered, and not in a house wife kinda way 🙂 She again gets tossed into a life threatening situation which returns her memories and when she comes back as Charly….you do not want her to be pissed at you! Davis then must rescue Jackson as he

is now being held hostage. The title of this film comes to meaning once you meet Charly and learn her story……

Davis returns to her old self of years before, planning to dump the child but it starts another sequence of action with Geena Davis kicking some ass! And she does it well in my opinion, she is right up there with

the other action queens.

I love her in this movie it is so not her 🙂 but in a good way.  Samuel L. Jackson is outstanding in this character

of sarcasm and his familiarity with actions brings the team together as he again works with director Renny Harlin.  The villians Craig Bierko and David Morse are astounding actors and bring charisma to the story.

Shane Black, writer of Leathal Weapon and The Last Boy Scout,  is quite the artist at combining action with shades of humor and keeping me interested and entertained, that is my recipe for a good action flic. Love the soundtrack, some great tunes 🙂