The distinguished Sidney Poitier starts off this film with his extreme talents in thrilling dramas.  Tom Berenger arrives shortly afterwards, together with his rawness acting appeal,  the wildness theme of the film and the perfect match for Poitier seems ideal for him and the character Tom has created. First time appearance for Poitier after eleven years as he returns to movies with this terrific story.  I 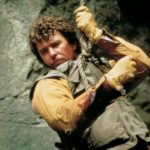 t is one of my favorites and is an easy choice because it is one of those rare movies when action is spiced up with straight humor as only Sidney Poitier can do 🙂 – might be showing some age here 🙂 –  What is themed  a classic fish out of water story sets the pace for two very opposite characters coming together as one force for a common goal.  Berenger be 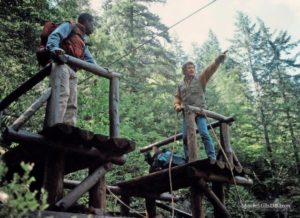 ing a sexy
hermit mountain man and Poitier the fancy city slicker FBI agent, they butt heads thru out the first half as they slowly start gaining respect for each other’s career choices while conquering the natural elements.

On the trail of a killer that has gotten away from the police as he kept his identity hidden and ending up in the mountains, Poitier discovers he now has to track this 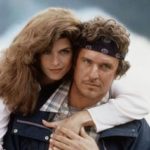 man into the wilderness and Berenger is the only one that has the survival skills to take him there.  Berenger however has other plans, he must race against the clock to rescue the guide for a group of five first time hikers, his girlfriend Kirstie Alley and Poitier will only slow him down.  When they get to the city, the coin flips and Poitier is in his element again guiding Berenger thru the city.  I love Kirstie Alley in this movie, her character as a str 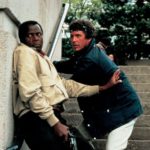 ong independent female completes this film as she just never gives up!!

Now the actor that plays the villian I cannot speak of 🙂 but I will say this, he adds flavor to the movie and is always a great bad guy 🙂 in any film you see him in. Director Roger Spottiswoode gives us a perfect

action packed drama and is a yearly watch in my books. 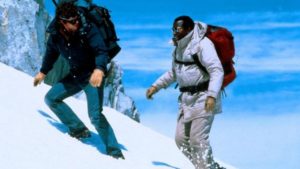